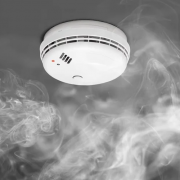 A smoke alarm is a stand-alone smoke detection and warning device, usually used in homes or individual apartments.

A smoke detector is part of a building-wide smoke detection and warning system, typically used in office, industrial, health care, and commercial buildings.

You will normally find moke alarms inside houses, townhouses, apartments or condominiums. They are found in areas where people live and sleep to alert the residents of the presence of smoke.

Smoke alarms are there to let the people inside the residence know about the presence of smoke. Any amount of smoke can be dangerous, because as the smoke gets thicker it can prevent escape, or the smoke may mean fire is on its way.

Smoke detectors are typically found in the halls of an apartment building or a condominium building.  They are different from a smoke alarm in that a smoke detector is one part of a Common Area Fire Alarm System.

A smoke alarm is a complete stand-alone fire alarm system. When it detects smoke, the smoke alarm makes enough noise to wake a person from a sound sleep.

If you are having any issues with your smoke alarms, please contact us and we can help you resolve this.